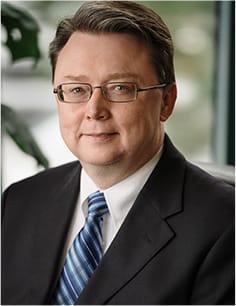 Tony has a variety of experience in personal injury litigation, wrongful dismissal claims, creditor’s remedies, builder’s liens, and is an experienced trial lawyer.

Tony completed his Criminology degree at Simon Fraser University in 1981. During the summer of 1980, Tony spent six weeks cycling across Canada with a friend, as ambassadors of Burnaby, delivering greetings from the Mayor of Burnaby to the Mayors in all of the cities and towns they visited, including a daily radio interview.

Following his graduation from SFU, Tony moved to Calgary where he worked as a Probation Officer and a Parole Officer for the next six years.  It was during this time that Tony met his wife when they crossed paths while she was completing a practicum for her social work studies.

Tony returned to the Lower Mainland in 1988 to commence law school. He graduated from UBC Law in 1991 in the top 10% of his class, was the recipient of the Evidence Award, and was called to the Bar in 1992. Tony completed his articles at McCarthy Tetrault in Vancouver, followed by work at Richards Buell Sutton in Vancouver, and Silverside Law in Prince Rupert, where he did a variety of legal work including insurance defence, construction litigation, wrongful dismissal, and criminal law.

After leaving Prince Rupert, Tony returned to the Lower Mainland once again and made his home in Cloverdale. He joined Kane Shannon Weiler LLP as a litigation associate in 1998, and became a partner in 2012.

Tony and his wife have two grown daughters.  When he is not at work, Tony enjoys cheering for the Glasgow Rangers Football Club, and spending time with his wife at their home in Sechelt, where he likes to work on his BBQ pit master skills.