The Inadvertent Employer: Homeowner Liability as an Employer Under the Workers Compensation Act 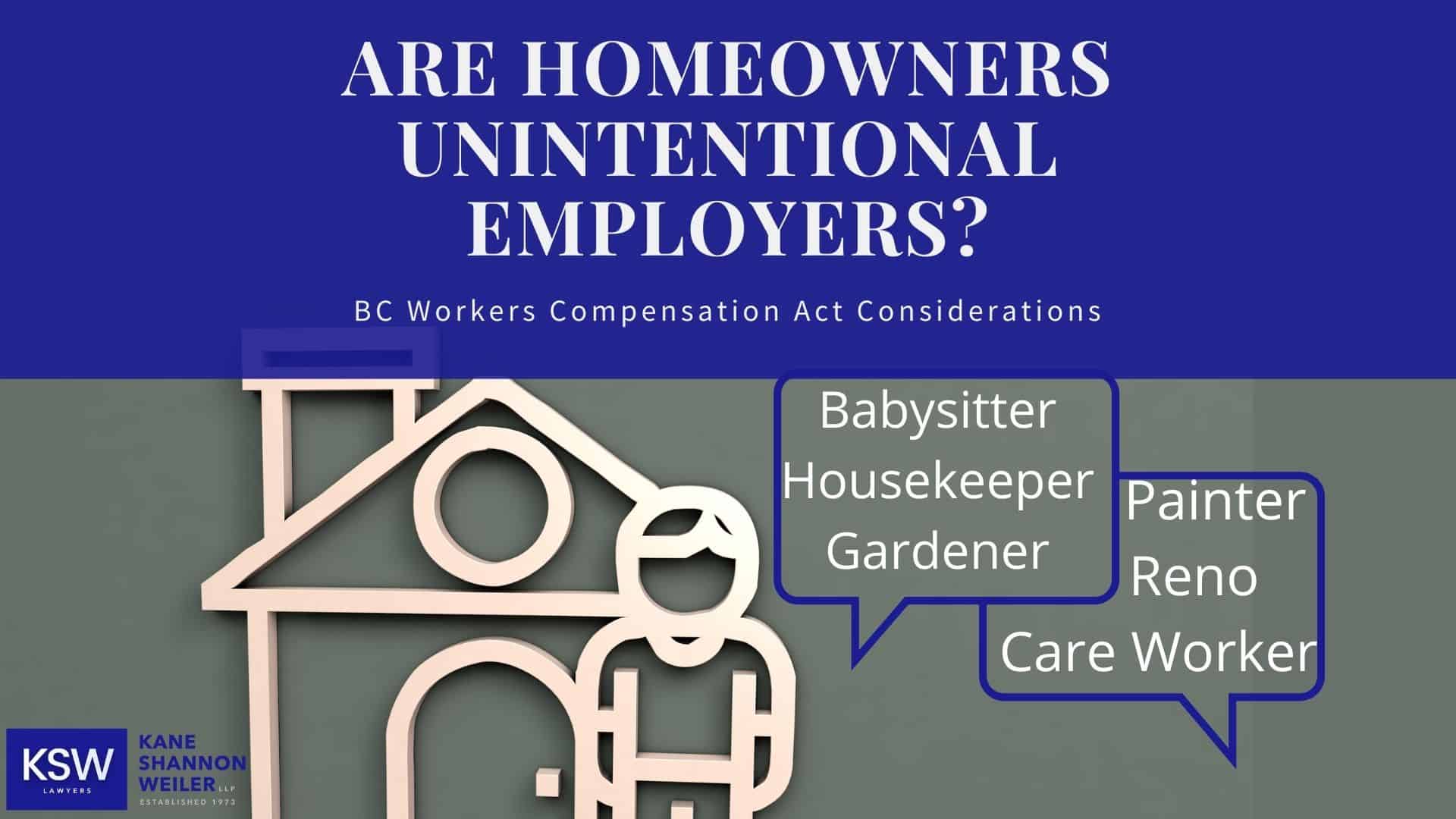 During the Covid-2019 pandemic, there has been a significant increase in home renovation and remodelling by homeowners.  While this has presented some homeowners with an opportunity to beautify and improve their homes, and while it has provided businesses with much-needed work during the pandemic, it also unfortunately presents some potential pitfalls which can trip up the unwary homeowner employer.  These potential pitfalls exist not only when a homeowner retains someone to work on a renovation, but also when they hire anyone to do work around the home, from nannies, to cleaners, to landscapers.

Under the Workers Compensation Act, RSBC 2019, c 1 (the “Act”), WorkSafeBC is empowered to promote the prevention of workplace injury, illness and disease, rehabilitate and compensate injured workers.  To that end, all eligible employers are required to register with WorkSafeBC.  What many homeowners don’t realize, is that under the Act, they can be found to be the employer of an individual working on their property, which can expose them to potentially significant financial penalties if a worker is injured while working on their property.

Oops! You are Actually an Employer!

WorkSafeBC applies a few basic rules when determining if registration as an employer is required:

Please note that even if you are not required to register, it is still possible to purchase voluntary coverage in circumstances where the individuals you have hired do not meet the hour requirements.

Even when homeowners have retained an independent business, it is important that they do their due diligence to ensure that the contractor is in good standing with WorkSafeBC.  Homeowners who fail to do so can become jointly liable with the business for unpaid WorkSafeBC insurance premiums.  You can confirm a contractor’s status by getting a clearance letter from WorkSafeBC.

In summary, it is important that homeowners take steps to determine whether the party or parties they have retained are employees who must be registered, or an independent business.  If you are unsure, it is important that you contact WorkSafeBC or a qualified legal professional who can advise you on the matter.  Failing to do so can open you up to unexpected penalties.

Penalties for Failing to Register with WorkSafeBC

The penalties for inadvertently failing to register with WorkSafeBC as an employer can be much larger than most homeowners would expect.  In addition to potentially being required to pay premiums, there is a significant exposure under s. 263(2) of the Act, which reads as follows:

(2)Subject to subsection (4), the employer must, in addition to any penalty or other liability to which the employer may be subject, pay the Board the full amount or capitalized value, as determined by the Board, of the compensation payable in respect of an injury or occupational disease to a worker in the employer’s employ that happens during the period of the default referred to in subsection (1).

In brief, under s. 263(2), if someone working in your home is injured while on the job, and they are determined to be an employee, and if you lack WorkSafeBC coverage, you can be required to pay all of the costs incurred by WorkSafeBC as a result of the injured worker.  In the case of major injuries, this can be extremely expensive.  In WorkSafeBC Review Decision R0076657, July 19, 2007, a carpenter was injured while working on a home renovation.  WorkSafeBC had incurred costs of over $54,000 at the time the decision was issued, costs which were still rising.

Fortunately for homeowners who have been found liable under s. 263(2), they are not necessarily forced to pay, as WorkSafeBC has discretion under s. 263(4) to relieve an employer of an ‘excusable default’:

(4)If satisfied that the default was excusable, the Board may in a specific case relieve the employer in whole or in part from liability under this section.

In Decision R0076657, for example, WorkSafeBC exercised its discretion under the predecessor to s. 263(4), the largely similar s. 47(3) under the old Workers Compensation Act, RSBC 1996, c 492,, and relieved the homeowner of 90% of the penalty cost.  Such an exercise of discretion is by no means guaranteed; in Review Decisions 16905 and 16906, September 13, 2004, for example, WorkSafeBC refused to provide any relief, and charged the full amount to the homeowner for the costs incurred on behalf of an injured worker.

Accordingly, it is important to remember that relief is by no means guaranteed, and even if granted, the extent of the relief is within the hands of WorkSafeBC and the Workers Compensation Appeal Tribunal.  Their decision to grant or withhold relief will be guided by a number of considerations, including the following, as set out in item AP5-263-1 of the WorkSafeBC Assessment Manual:

If WorkSafeBC has made a determination and requested payment from a homeowner under s. 263, it is imperative they seek legal advice promptly, as there are deadlines limiting the time to seek a review or to bring an appeal against the decision.

Note to Readers: This is not legal advice. If you are looking for legal advice in relation to a particular matter, please contact Jesse Dunning at jtd@old.kswlawyers.ca.

Jesse Dunning is an experienced employment and labour lawyer in Abbotsford and part of the Employment & Labour Group at KSW Lawyers (Kane Shannon Weiler LLP). Jesse assists both individuals and local businesses with workplace issues. His expertise covers all facets of the workplace as well as general civil litigation, estate disputes and personal injury.