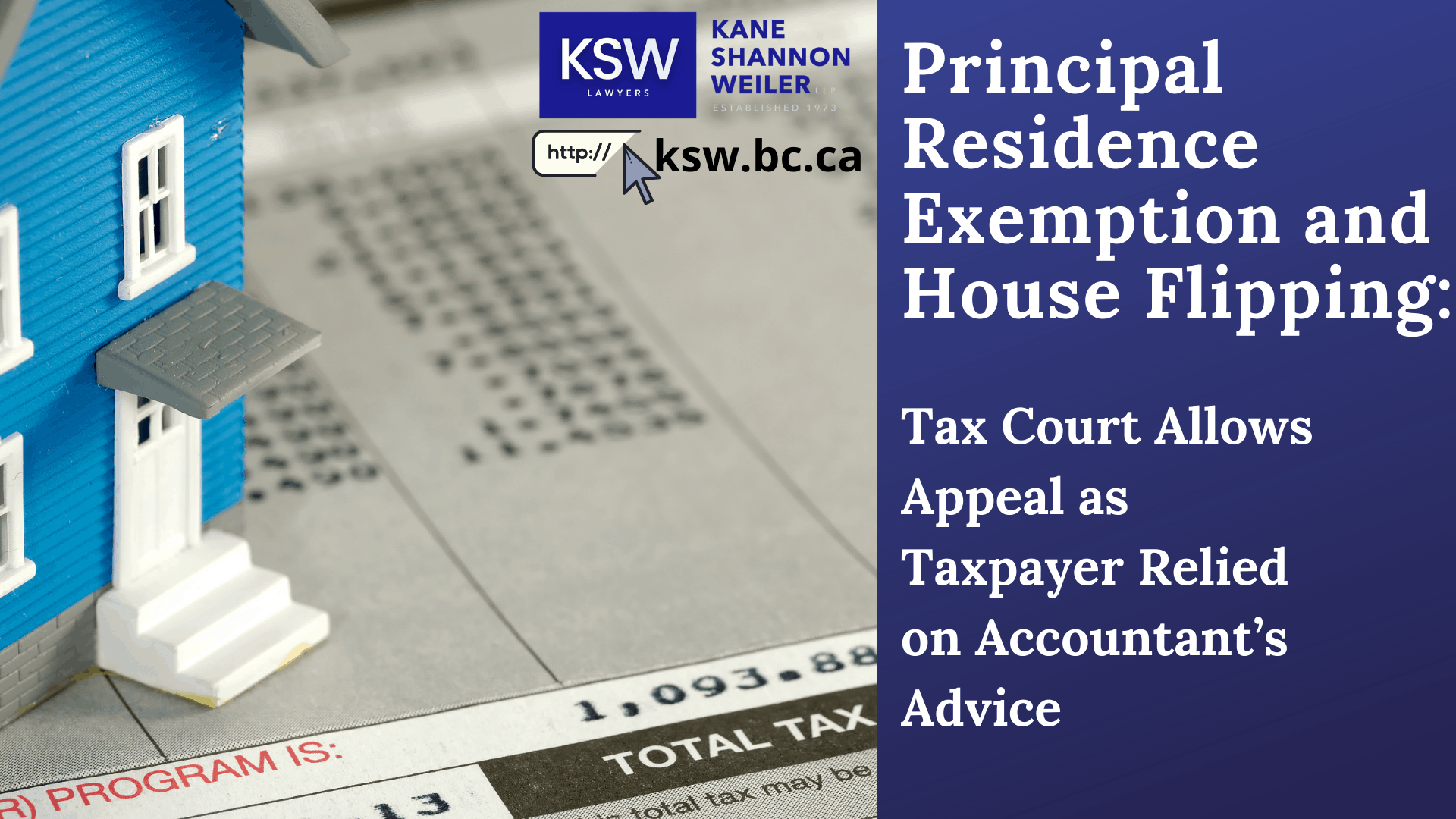 The Tax Court of Canada recently released a decision in Hansen v. The Queen, 2020 TCC 102. This was a case where the taxpayer was reassessed for property that he owned and respectively sold between 2007 and 2012. Mr. Hansen (the “Taxpayer”) sold 5 homes during the respective tax years, and claimed the principal resident exemption. However, the Canada Revenue Agency (the “CRA”) treated the sale of each of these properties as income from a business or from an adventure in trade and reassessed the Taxpayer at 100% of the gain. A typical argument relied on by the CRA is the intention of the taxpayer to purchase the home with an intention to sell them at a profit.

The Taxpayer lived in each of the 5 properties for under a year, and made improvements to each of the homes to suit his family. While filing his taxes, he testified that he informed his accountant of all the property transactions, including his intension for each property and reason for sale, at which time the accountant advised the principal residence exemption applied. The accountant testified at trial and corroborated the Taxpayer’s evidence at trial.

The 2007-2009 reassessments were issued to the Taxpayer outside of the “normal reassessment period” of 3 years as defined by subsection 152(3.1) of the Income Tax Act (the “Act”). This is something that we often refer to as the statute barred years. In order to open up an assessment beyond the normal period of 3 years, the CRA must justify why a reassessment should be reopened or reconsidered. One such reason that the CRA can reopen reassessments beyond the normal period is if the CRA can prove that (1) the Taxpayer had made misrepresentations in his or her tax returns; and (2) this misrepresentation was attributable to neglect, carelessness, willful default or fraud.

In this case, the CRA relied on the argument that the Taxpayer reported the sale of the properties as his principal residence, when they should have been declared as business income.

The Tax Court cited longstanding case law which states that there is no negligent misrepresentation where, at the time of filing the return, the taxpayer carefully considered his or her position and filed on a basis that he or she believed, in good faith, to be correct. This is the case even if the CRA does not agree with the manner in which the taxpayer reported his or her income even if the taxpayer’s position is ultimately found to be incorrect by the Tax Court.

In this decision the Tax Court found that the Taxpayer carefully assessed his situation and filed his returns on a reasonable and honest belief that he was entitled to claim the principal residence exemption. The Taxpayer was honest with his accountant when the sale of the properties occurred, and the court relied heavily on the accountant’s evidence regarding the Taxpayer’s intention at the time of filing.

The Tax Court held that the CRA was not entitled to reassess the Taxpayer for the statute-barred years (2007-2009), and overturned those reassessments.

Is the Transaction an Adventure in the Nature of Trade

The CRA has the ability to impose penalties for the taxation years that have been reassessed under subsection 163(2) of the Act. The Taxpayer in this case was assessed with penalties for making a false statement or omission in filing his income tax returns. Typically penalties range from 5% to 50% of the amount that is being reassessed.

The Tax Court ultimately decided that the 2007-2009 years were statute barred, and as such gross negligence penalties did not apply.

With respect to the 2011-2012 taxation years, the Tax Court considered factors that the CRA must establish to justify the penalties. The CRA must prove that the conduct of the taxpayer was a marked and substantial departure from the conduct of a reasonable person in the same circumstances. The question to be answered is whether the Taxpayer was knowingly or willfully blind in his reporting obligations.

Note to our Readers: This is not legal advice. If you are looking for legal advice in relation to a particular matter, please contact our Tax Group.