In a recent case from the Ontario Superior Court, Iriotakis v. Peninsula Employment Services Limited, 2021 ONSC 998, the plaintiff was terminated from his employment with Peninsula without cause on March 25, 2020. He was then 56 years of age and had worked for Peninsula as a Business Development Manager for just over two years.

The job duties he had were more similar to a sales position than a manager position, and Mr. Iriotakis’ compensation was largely commission based. He received a base salary of $60,000 per year but his compensation for the last full year of his employment (2019) was $145,186.30.

[19] I was asked to make findings about the job market and the possible impact of Covid-19 on Mr. Iriotakis. I have little doubt that the pandemic has had some influence upon Mr. Iriotakis’ job search and would have been reasonably expected to do so at the time his employment was terminated in late March 2020. However, it must also be borne in mind that the impact of the pandemic on the economy in general and on the job market, in particular, was highly speculative and uncertain both as to degree and to duration at the time Mr. Iriotakis’ employment was terminated. The principle of reasonable notice is not a guaranteed bridge to alternative employment in all cases however long it may take even if an assessment of the time reasonably anticipated to be necessary to secure alternative employment is a significant factor in its determination. I must be alert to the dangers of applying hindsight to the measuring of reasonable notice at the time when the decision was made to part ways with the plaintiff.

[22] I do agree that the plaintiff’s age and the uncertainties in the job market at the time of termination both serve to tilt the period of reasonable notice away from the fairly short period of notice that his short period of service might otherwise indicate. However, these factors do not apply to the exclusion of the others. A balanced approach is what is called for.

Lastly, in addressing the issue of whether the CERB received by Mr. Iriotakis should be credited to his employer as mitigation income, the Court held as follows:

[21] … On balance and on these facts, I am of the view that it would not be equitable to reduce Mr. Iriotakis’ entitlements to damages from his former employer by the amount of CERB given his limited entitlements from the employer post-termination relative to his actual pre-termination earnings. I decline to do so.

In the upcoming months we will no doubt be seeing new decisions from British Columbia courts clarifying the effects of this pandemic on the notice period and mitigation.

Note to Readers: This is not legal advice. If you are looking for legal advice in relation to a particular matter or drafting of workplace vaccination policy, please contact Chris Drinovz at cdd@old.kswlawyers.ca.

Chris Drinovz is an experienced employment and labour lawyer in Abbotsford, Langley, Surrey & South Surrey, a Partner at KSW and Head of the Employment & Labour Group at KSW Lawyers (Kane Shannon Weiler LLP). Chris has been assisting local businesses with workplace issues since 2010. His expertise covers all facets of the workplace including wrongful dismissal, employment contracts, workplace policies, and WorkSafeBC matters, including occupational health & safety. Chris is on the Executive of the Employment Law Section of the Canadian Bar Association BC, and a Director for Surrey Cares and Greater Langley Chamber of Commerce. 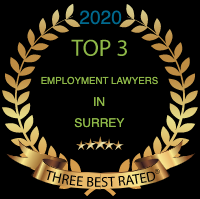